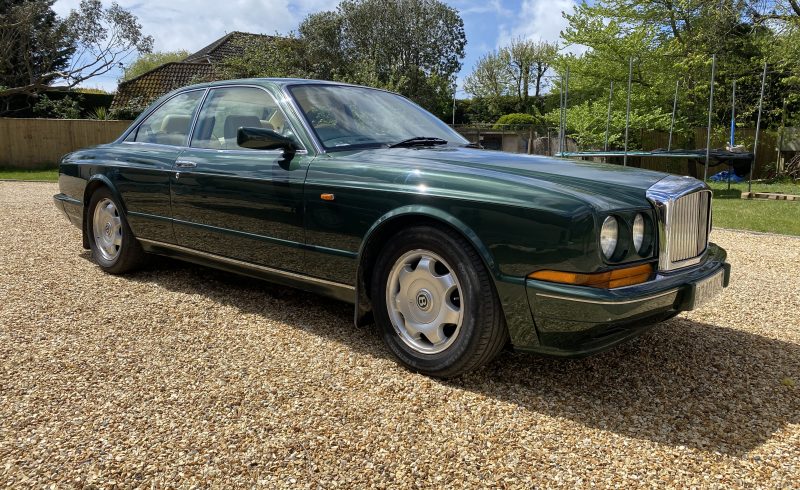 First launched in 1991, the Continental R was the first Bentley not to share a body shell with a Rolls-Royce since the early 1960s. Despite a 12-year production run, such was the exclusivity of the Continental R that only 1,236 “standard” cars were actually built.

The 6.75-litre V8 engine was blown by the same Garrett turbocharger as the Turbo R and after a revision in 1994 – involving Cosworth modifications to the heads – power increased to 365 PS with 678 Nm of torque from its 4-speed automatic transmission. In its day, the Continental R was the fastest, most expensive and most powerful Bentley ever.

The Mulliner Park Ward styled two-door 2+2 coupé was a powerfully elegant grand tourer, capable of crossing continents effortlessly and in great comfort, thanks not only to its luxurious interior but also due to its adaptive ride self-levelling hydraulic suspension.

The Continental R so impressed the Sultan of Brunei that he reportedly wrote a cheque for over £2m at the Geneva Motor Show for the Vermillion Red launch car; becoming the model’s first customer.

This particular car was built in October 1994 and supplied through Jack Barclay of London. It was first registered in January 1995 and spent most of its first two decades in Scotland. Since late 2014, the car has been in the ownership of an investment company director based in the New Forest.

The handsome exterior is finished in a superb Balmoral Green, with hand-painted gold coachlines. Beyond the characteristic temple-shaped radiator grille, the exterior chrome work is much reduced compared to previous models, reflecting contemporary design tastes.

The Bentley sits on 17-inch 7-spoke alloy wheels with green centre badges, which are in good condition and shod with matching Michelin tyres.

The inside of the Continental R is upholstered in soft cream-coloured leather, with dark green accents and piping on the seats. There’s light creasing and patina across the front seats and steering wheel as you’d expect, but it is still a lovely place to sit and look at the beautifully wood-veneered dashboard and door tops.

In direct contrast to the upholstery, the lambswool carpets are dark green and edged with cream trim. The boot space is identically lined and looks as clean and tidy as the cabin.

Mechanically this Bentley Continental R is everything you would expect it to be, a testament to its excellent engineering combined with regular servicing and maintenance over the years.

The car comes with numerous invoices for general maintenance and repair, notable items including renewal of the steering rack in late 2016, and has a current MOT valid until March 2022.

The leather book pack includes original owner’s manuals and the service record shows 11 stamps from Bentley main dealers for the first few years and then marque specialists thereafter as follows:

Buying a Continental R such as this should not be considered on the basis of investment potential – although surely after 26 years, depreciation is no longer an issue – but with an expectation of superior engineering and quality that can’t be found in mass-produced and largely soulless modern executive cars.

And of course you’re buying into a “Bentley” lifestyle – or at least the feeling of it when you’re sitting comfortably behind the wheel motoring to Monaco, or even just wafting to Waitrose!