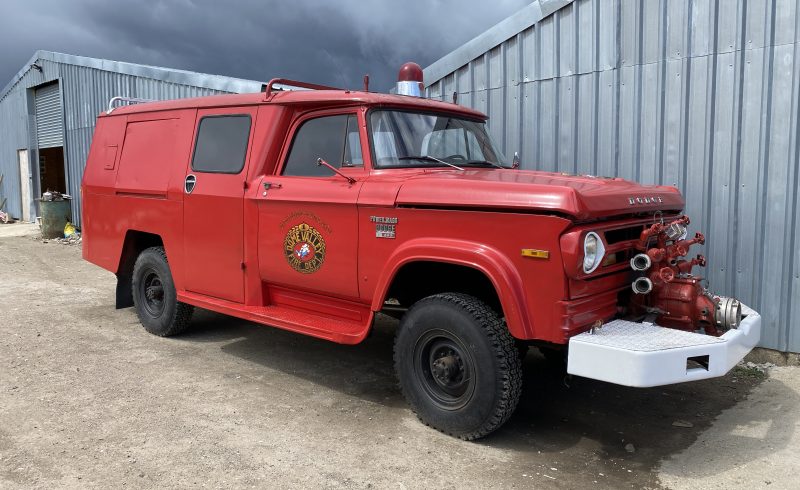 Forged in the logistics battles of World War 2, the first civilian Dodge Power Wagon was produced in 1945 and was based on the Dodge WC-series 3/4-ton utility trucks that had carried the US Army into war on two continents.

In the late ‘50s, the Power Wagon mantle was passed to a four-wheel-drive variant of the wholly civilian Dodge C-Series trucks and then in the early ‘60s to the more modern-looking flat-sided D-series which continued through the 1970s.

Fundamentally a four-wheel-drive pick-up truck, the Power Wagon was delivered in all manner of specialist usage configurations over the years including recovery vehicles, ambulances and, of course, fire trucks.

Recently imported from Scandinavia, this 1970 Dodge W300 Power Wagon is in firefighting specification complete with a PTO-driven (power take off) pump at the front and a large water tank in the back. The pump is still connected by the way – with a big shut-off valve down between the front passenger’s legs – but as yet we haven’t found a proper fire hose to test it with.

This Power Wagon of course has four-wheel-drive transmission, with both high and low range gearboxes, and is powered by what we believe to be the original Chrysler-built 318 cu-in (5.2-litre) Hemi-V8 engine.

The badge decals on the doors declare the truck to have belonged to the Dome Valley Fire Department. Whether there was or is such a thing isn’t clear – Dome Valley in Arizona only has a single volunteer firefighter – but the city name of Enningdalen written above is real and sits just inside the Norwegian-Swedish border between Oslo and Gothenburg.

The vehicle was repainted a few years ago and although there are a few runs in the paint it looks great in bright fire-truck red. It has also had a new battery, brake master cylinder and electronic ignition fitted. The underneath of the vehicle is completely rust free and the chassis appears to be in excellent order.

Inside, the front cabin is in great condition too – the seats, floor lining and pedals show hardly any wear. In the spacious rear cabin, there are single seats either side of the water tank and both are in good order although in a different coloured vinyl to the front bench seat, which suggests that the front cabin may have been refurbished.

Unlike most of the Power Wagon based fire trucks we’ve been able to find online, and they are surprisingly few and far between, this is the only one we have seen with an all-enclosed metal-paneled rear compartment, which perhaps adds to the rarity and most certainly gives it more potential for future uses.

There are many enthusiasts of fire-fighting vehicles, and we think this one would make an excellent way for someone with limited space to start a collection – it would also offer something a little bit different for the established collector.

Fire-engine geeks aside, this Power Wagon is also ripe for stripping out and converting to an expedition camper or maybe a quirky food and beverage truck. Can you imagine that tank and pump converted for serving beer at festivals?

If you’ll be serving both drinks and food, we’ll even give you an idea for a brand name at no extra charge – but you’ll have to be a fan of the children’s TV show Trumpton – how about “Dribble and Grub”?

We’ll get our coats…