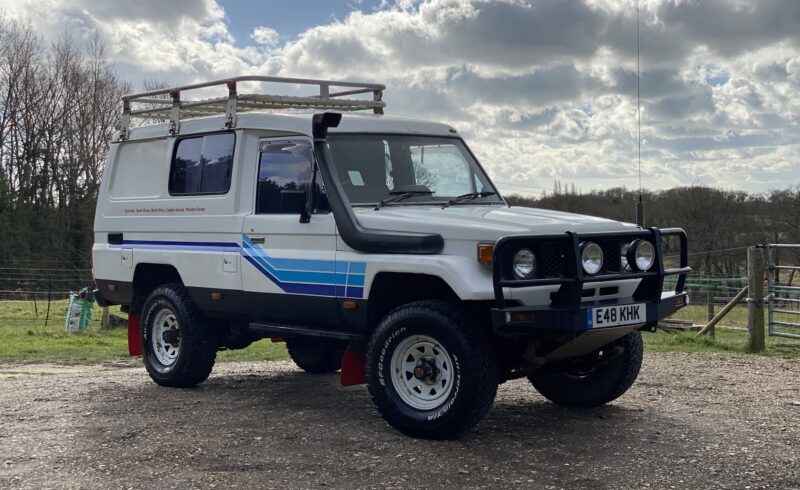 One of the original Troopy’s made with the Legendary 2H engine ! The same engine used in the 60 series.

This model is a 1988 and was built in Japan for the Australian market. It was used in Australia for the first years of its life and then converted to an Off road camper to explore Australia and the World!!

It has 2 captain chairs in the front with arm rests, a iPad holder (For navigation) and 4 USB/12v ports. It has a CB radio and CD with Aux and iPhone connectivity.

The front has a custom Roo Bar made from very think good quality metal. There are auxiliary lights front and rear.

The rear has 2 bunks (1 small and large one) which converts to a bigger double bed. There is also a 30 litre stainless steel water tank with electric pump, A fold out cooker and serval places to prepare food etc.

The car has Dual Fuel tanks and there is a button to switch between them. It cruises happily at 60-65mph and could do more. It also has a dual battery set up, with one being a leisure battery. It runs a split charge system so the leisure battery charges while driving.

The body is straight and without any major dents. There is some surface rust around the vehicle and looks a bit untidy in places but the chassis and underneath is rock solid.

The vehicle has stickers on the side, Australia, South Africa, North Africa, Eastern Europe, Western Europe which is the places this little beauty has traveled to so fart with its previous owner.

It is ready for its next adventure, It is very well equipped to drive pretty much anywhere, These Land Cruisers are the choice of the UN and other military organisations due to their reliability and sturdiness. The y don’t come much stronger than a Land cruiser from the late 80’s