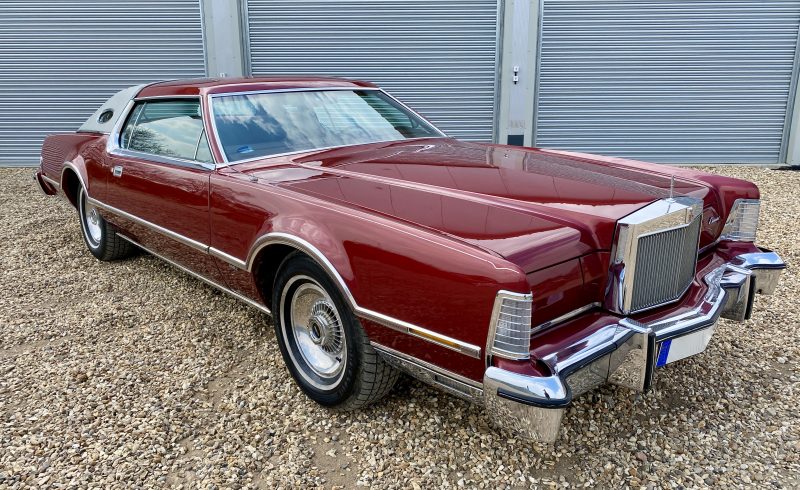 Lincoln – a division of the Ford Motor Company since the 1920s – produced the Continental Mark IV between 1972 and 1976, aiming it at the personal luxury car market to compete with the Cadillac Eldorado and Rolls Royce Corniche.

Featuring sharp leading edges, headlamps hidden behind vacuum powered doors and a tall – almost Rolls Royce – style radiator grille, the 2-door coupé had an incredibly long bonnet, part-vinyl roof with oval “opera windows” and a relatively short boot. A notable feature at the rear was the spare wheel cover moulded into the boot lid – something that was merely a design folly as the actual spare was located on a shelf at the front of the boot behind the cabin.

Under the bonnet – or hood if you prefer – a 460 cu.in (7.5-litre) V8 rumbled away producing a rather disappointing 202 hp in comparison to its main rivals which both managed to harness an extra 20 or so horses and were also lighter. The Continental was still good for a top speed of 120 mph but its extra weight meant it took a little longer to get there, driving through a 3-speed automatic transmission.

In its run out year of 1976, in a bid to boost flagging sales, Lincoln collaborated with Bill Blass, Cartier, Givenchy and Emilio Pucci to produce the Designer Series special editions, with each having colours, trim and materials developed in consultation with the fashion houses. Additionally the opera window featured the relevant designer’s signature and a plaque was mounted on the dashboard plated in 22-carat gold.

The car we have for sale here is an Emilio Pucci Designer Series edition; first registered in 1977 and recently imported to the UK from Switzerland. It is currently not registered with the DVLA but will be done prior to sale.

Pucci was known for his multicoloured garments with geometric designs, but thankfully the automotive interpretation stuck with more modest combinations of red and silver. By all accounts the Pucci edition is the rarest of the Designer Series and many auction houses and dealers list them as hard to come by.

The exterior is painted in Moondust Red with silver trim and roof vinyl. It seems in a pretty good condition considering the age of the car, with a nice lustre to the paintwork and bright chrome trims.

Whilst the interior might make you wonder how they got your Grandma’s old three piece suite inside, the thickly-pillowed dark red Versailles velour upholstery is surprisingly comfortable and in period was seen as more decadent than leather. There are a few tears and holes in the fabric now, particularly on the driver’s seat and armrests, but nothing that couldn’t be repaired by a good trimmer.

The Mark IV has recently been serviced and, so far as we’ve been able to test, everything works – even the vacuum powered headlamp doors, a common headache on such classics. Although air conditioning is fitted, we haven’t been able to check it.

Although a mid-70s Rolls Royce Corniche still appears every bit the luxury motor carriage, the Continental Mark IV and its local rival Eldorado look like supporting artists from the Bond-film “Live and Let Die”. In fact both cars did appear on screen with one being referred to as a “white pimpmobile”.

But the Lincoln Continental Mark IV’s ‘70s retro-cool look is very much the charm and appeal of this car and it will doubtless turn heads wherever you go. You can pretty much guarantee you won’t be parking up alongside another one.

As with all of our classic cars, Part exchanges are welcome and we are happy to take card payments or Crypto Currency