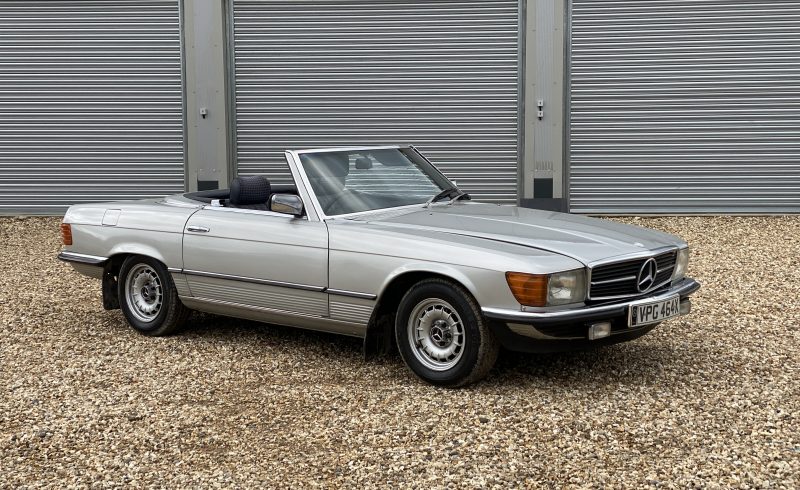 The R107 series SL is Mercedes’ second longest-serving model (after the G Wagen) and stayed in production largely unaltered for 18 years between 1971 and 1989. All came as standard with two seats and a folding fabric roof. An optional hardtop enabled a rather more comfortable four season use and the rear bench could be fitted with folding seats for a couple of compact passengers.

More of a luxury sporting tourer than a sports car, the third-generation SL had a variety of fuel-injected engine options over its lifetime from the 2.8 and 3.0-litre straight-sixes to V8s of 3.5 to 5.6-litre and a number of capacities in between. Gearboxes too varied from 3 and 4-speed autos to 4 and 5-speed manuals.

Although the SL officially stands for Super-Leicht (super-light in English) – and the first generation SL may have been so – the R107s tipped the scales at close to 2 tonnes with a driver and passenger on board. Despite this they handle surprisingly well and like all Mercedes of the period are over-engineered and more than capable of crossing continents in comfort.

This Mercedes-Benz 380SL had the smaller of the two V8s that could be ordered when it was first registered in November 1981 (the larger one being 5-litres). But it still delivered 215bhp and 221lb.ft of torque through its 4-speed automatic transmission, giving it a claimed top speed of 134mph.

It is finished in Silver metallic with a dark blue hood and a blue vinyl and cloth interior. The 380SL also comes with its original body-coloured hard top which really extends the use of cars like this in the UK climate.

The bodywork looks very straight and the paint is in a lovely condition, with few flaws or blemishes. There are, however, a couple of nicks in the fabric of the soft top – a common issue caused by pinching from the joints of the folding frame mechanism underneath – but they don’t affect the function of the roof.

The SL sits on its original 14-inch Baroque style alloys more commonly known as “Mexican hat” wheels. These are made by Fuchs, who are better known for supplying Porsche with lightweight forged rims. Unusually, but helpful in protecting the bodywork and underbody, each wheel arch is fitted with a Mercedes-branded mud-flap.

Inside the car, the dash top and instrument panel seem in good order with none of the cracking and splitting that are often seen on these models. The wood veneer across the dash is also intact but the centre console wood trim has been replaced with a reasonable but not exactly matching grain. Likewise the wooden gear knob is a later addition.

The interior upholstery and trim looks generally strong and the original seats are in good order, although there are a couple of snags in the passenger seat cloth facing and vinyl. The radio is a modern retro-style unit.

The accompanying file contains many expired MOTs and service receipts and invoices, including from Mercedes main dealers. These show that the car had a new rear brake caliper, thermostat, hazard lights switch, roof catch and lock around four years ago.

The R107s are really good value classic cars, especially when you consider how much Benz you get for your buck. Asking prices for a good Mercedes SL have returned to form in the last year or so and we think they’re a timeless classic which will always be a safe place to put your money.