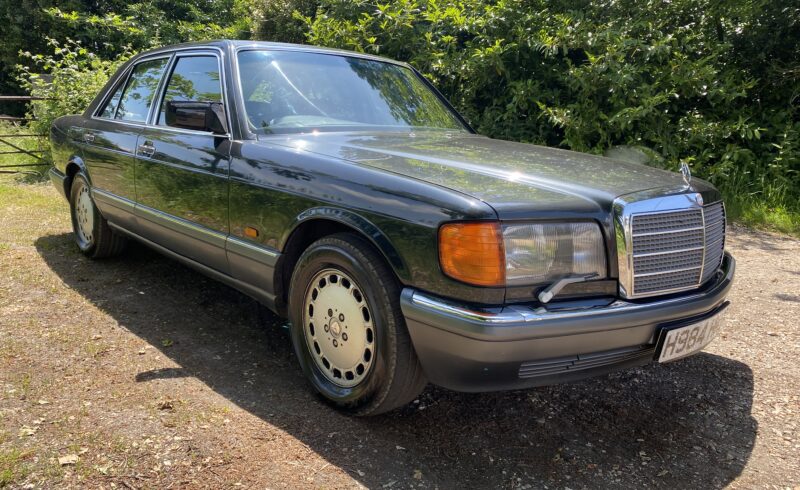 The Mercedes-Benz W126, was the second generation of their flagship S-Class model-line and represented the pinnacle of luxury executive transportation throughout its 12-year production run. The first series of W126 were introduced in 1979 with three different engine sizes – 2.8, 3.8 and 5.0-litres – the first a straight-six and the others V8.

The S-Class is well-known in Mercedes circles to always be the first model fitted with new and innovative technologies, including drivetrain developments, safety systems and of course cabin equipment – the S does stand for “special” after all.

In mid-1985, production began on the second series cars, with revised, sleeker styling and new more efficient six-cylinder engines and enlarged V8 motors. The 5.0-litre was the only one to carry over to the new model but like the others it was given electronic ignition and Bosch fuel injection.

Whilst the sixes had manual gearboxes as standard, the larger-engined cars were all fitted with Merc’s 4-speed 4G-Tronic automatic transmission – a sophisticated electronically-controlled and hydraulically-operated gearbox which has continued to evolve over the years into the 9G-Tronic ‘box used in current models.

It has had only 5 owners from new and it is notable that the last two each kept the car for around 10 years. The last owner always kept it garaged when not in use and ensured that it was well maintained and repaired whenever necessary. As a result, the car is in an outstanding condition inside and out with well-sorted mechanicals too – it drives like a new car.

The exterior of the car is black with dark grey on the lower body panels, which are sometimes referred to as ‘Sacco panels’ after Mercedes’ head of styling, Bruno Sacco. As we said before, it is in very good condition and there are no signs of obvious damage. The 15-hole light alloy wheels also have a nickname – Gullideckel Felgen – which for those of you not well versed in the Teutonic tongue means ‘manhole cover wheels’ – we love geeky facts like that!

The interior is upholstered and trimmed in mid-grey leather with a walnut burr veneer across the dashboard, centre console and door trims. Again, all is in great condition – including the carpets, mats and headlining – and looks very original aside from the addition of a later CD Radio.

The 500SE has a current MOT valid until December 2021, which it passed with no advisories, and it also comes with a large history file containing numerous previous MOT certificates and hand-written garage bills for repairs and maintenance – the kind you get from a traditional, experienced and reliable local mechanic.

The car also has its original service booklet which lists 16 stamps (14 of them from main dealers) at the following service centres and mileages:

We don’t think you can go wrong with a Mercedes-Benz of this era – the W126 was the penultimate over-engineered S-Class model before accountants from Chrysler started to ask whether Mercedes components really needed to be built so well.

As a late model W126, this example also benefited from a decade of production development and was most certainly built to last. The mileage it currently displays is not even halfway towards the number that commercial drivers start to think about trading them in – and its condition is better than others we’ve seen at half its age.

The W126 may not yet be considered a classic, but this statesmanlike 500SE oozes class from every panel, attracting nothing but admiration and it surely won’t be long before values start to rise the way its predecessors have.

But buy it to enjoy now, buy it to drive, buy it to polish first thing on a Sunday morning before going out to lunch or to a car show. An S-Class doesn’t get much better than this.