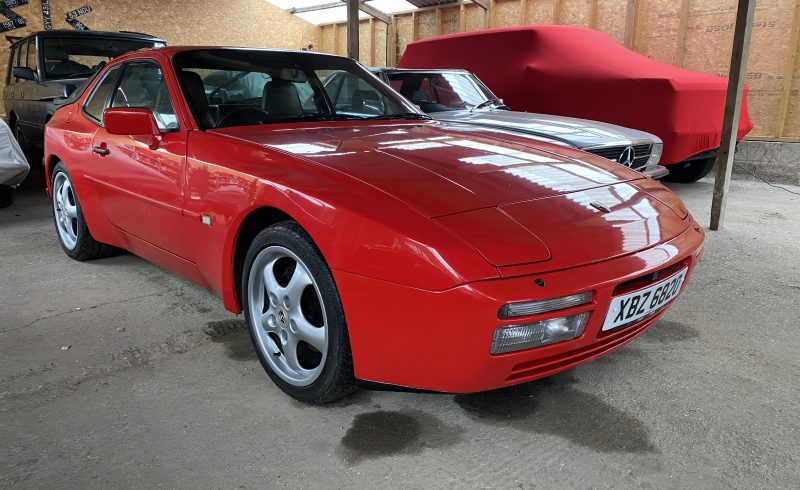 Having already broken their “rear-mounted air-cooled engine” mantra with the transaxle Porsche 924 of 1976, the evolution to the 944 six years later came as less of a shock to the Porsche purists.

The 944 was more widely admired for its handling – thanks to its near-perfect 50:50 weight distribution – than for its acceleration or top speed. Even the early turbocharged versions were rather underwhelming although they could get to 60 mph in just under 6 seconds.

From 1989, the larger 2.7-litre engine gave no uplift in power but developed considerably more torque which made it a nicer car to drive, especially up and down through the gears on country A and B-roads.

However, with the arrival shortly after of the 211bhp 3.0-litre S2, like this one, the 944 finally got the power it deserved and the performance now matched its handling. And thanks to the more rounded nose and restyled rear from the turbo model, it had the looks too.

Available in both coupé and convertible form, by the time the 944 range ceased production in 1991 it had become the most successful model Porsche had ever made.

This 944 S2, was first registered in January 1991 and is finished in the classic Guards Red, an eternal favourite of the Porsche community and much more exciting than the mostly grey cars coming out of Zuffenhausen lately.

The exterior condition is very good, with few flaws or blemishes in the paintwork and little to do on the body. The front and side indicator lenses have been swapped out for clear glass units which gives the car a much less dated look.

The 944 would have originally had D90 design wheels but this car sits on Porsche Cup alloys, taken from their slightly later 911 (993) model. We think they rather suit the car, and are in good condition, but it would be straightforward to revert to a more period-correct look if desired.

Inside, the black leather seating and upholstery appears in good order with no evident damage or wear beyond the patina expected with the mileage.

The car comes with its original leather folder containing the owner’s manual and service booklets as well as information on its aftermarket Sniper alarm system.

The 944 S2 had a big service in February 2019, which included a new starter motor and in September of the same year had its cambelt changed and water pump replaced.

It has a current MOT valid until the end of June 2021, which it passed with just the one advisory on a defective bulb, but we believe it will need some work on the passenger-side sill before the next inspection.

Many consider cars such as the Porsche 944 to be something of a sweet spot in the classic car world. They are old enough to give a very analogue driving experience and relative simplicity of repair, yet new enough to have the reliability and safety features that we take for granted in modern cars.

This last of the line S2 variant has it all; power, handling and looks with the mechanical excellence that over 10 years of production experience had achieved well before this one left the Stuttgart factory.

At this price, it’s too good an opportunity to pass up the chance of owning one of the best Porsche ever made.