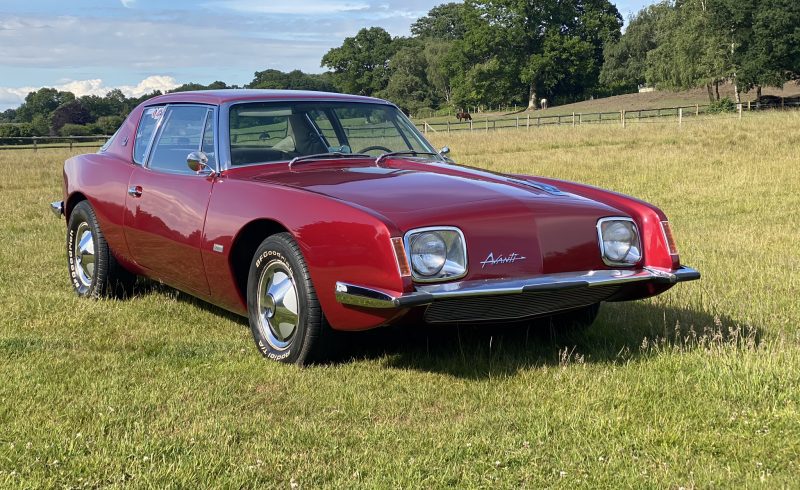 What a rare car, Back in 1963 Studebaker was on its last legs and struggling to keep the lights on. They hired Raymond Loewy (A very famous designer of the time, quoted to be “The man who shaped American” Most Famous for the guy who designed the Coke bottle) a car that was to propel Studebaker back to the top.

The Avanti broke 29 world records back in 1963, including reaching 168MPH in a standard Supercharged Avanti, The highly modified version reached 196MPH!!!

The Avanti was born, meaning forward in Italian. The first Avanti’s were built using Studebakers own V8 engine which were preferred by Modders as the block was said to be stronger than the Chevy counterpart. The Avanti has a Full Fibreglass body and Studebaker used a strengthened Lark convertible Chassis for the build to give the car more rigidity.

The car was bought new, in New York in 1963 by the first owner Roger Hueber. I have the original Plaque which was placed in the car when it was built for him. Then in around 1976 the car was imported to the UK and sold to Mr Lench of North London,Then in 1993 the car was bought by the previous owner and I have had it for the past 2 years.

I have the original factory build sheet, with spec, The car was Originally a R2 Supercharged V8 with the twin track rear axel (This is the spec you want from the factory) and has since been upgraded to R3 spec including ported and polished R3 heads, Valves and retainers.

I have a few old Mot’s and a letter from the previous owner in 1990 stating the then 38,000 was correct to his knowledge.

Since owning the car, I have spent a small fortune on it. I have had the engine bored out from the original 289cu to 305cu to R3 specification.

Custom built electronic Distributor and ignition set up from Myers Studebaker in the US. We estimate that the car has had over £10k spent on the engine internals plus the work I have had done.

It has 10 months MOT, even though it is exempt of having a MOT i thought it would be good to show the condition and quality of the car. No advisories either.

I have just had the automatic gearbox rebuilt at a London Specialist, Which was just shy of £2k. The car runs great and starts on the button. The dash board has just been overhauled and all the gauges work, new speedo cable and tachometer too.